More than half of middle-class South Africans believe they will never be financially free, according to the Visa Wealth Worries 2013 survey.

“South Africa, and indeed the whole world, has gone through a very tough time over the last few years. We wanted to assess attitudes to money, flag areas where people are putting themselves at risk and help people grow and protect their wealth,” says Visa Country Manager for South Africa Mandy Lamb.

The survey, which was carried out to gauge middle-class South Africans’ approach to money and wealth creation, found that 52% of respondents felt they would never be free while 46% said they thought they would achieve it – only 2% said they had already achieved financial freedom. Of those who think they will one day be financially free, 68% said they would only achieve this after the age of 50.

It concerning that so many people feel that disempowered about their finances. A person with a starting salary of R15 000 a month, which increases by 6% a year, would over their lifetime earn R20 million, so the fact that this person believes they will never be financially free it is clear indication that we need to start taking more control of our finances.

When asked about the biggest threat to their wealth, 29% of respondents cited “debt levels”. Eighty-nine percent of respondents said they had debt with an average repayment of R7 283 a month. In comparison, of the 80% of people who are saving, the average monthly saving is only R2 699.

Excessive debt is without a doubt the biggest hurdle to wealth creation and is often the main reason people are unable to save. Unfortunately debt accumulation is often a matter of hindsight; most people over the age of 40 will tell you that if there was thing they would re-do, it would be to take on less debt.

Another interesting finding is that 41% of people believe they will work beyond the age of 65 while 15% said they would never retire. Most people are adjusting their idea of when they will retire as we start to live longer. Many 60 year olds are still fit and healthy and contributing to the workplace and delaying retirement is also one way to boost your retirement funds. If you delay your retirement by just three years you can increase your income in retirement by 20% so this may be a sensible strategy for those who have left retirement planning too late. This does assume you will be fit and healthy enough to continue to work.

What your lotto dreams say about your priorities

A “winning the lotto” question is always useful in highlighting ones priorities. What is important is to realise that you do not have to win the lotto to pay off your debt or to start investing. You just need a budget and a plan and to stick to it. 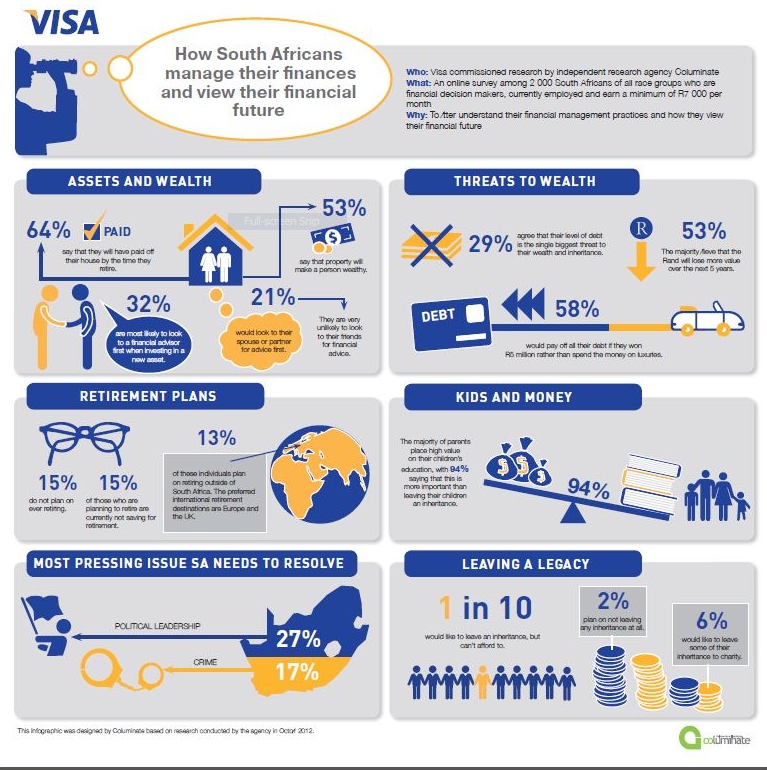 Maya Fisher-French consulted for Visa on the survey.