How rand movements impact the economy and your portfolio

by Imraan Jakoet, Investment Analyst at Glacier by Sanlam 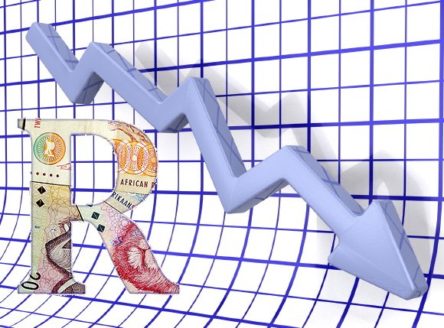 The recent movement in the rand saw the currency move to multiple-year lows (or highs depending how you look at it) to the US dollar and subsequently rebounded last week. Movements like these don’t only impact the cost of forex for your overseas holiday next month but also impact your local and international investments. More importantly these movements impact a number of areas in the economy which further filters through to you, the end consumer. In this article we’ll discuss some of these areas and the impact they may have had on your money.

Currency movements have an impact on various aspects of an economy as they directly impact any transaction which involves the conversion from one currency to another. Sectors and individual companies differ on their exposure to foreign markets and hence their exposure to currency volatility will differ. Companies with little to no exposure to foreign markets may not be directly impacted by currency movements but their consumer base or competitors certainly might be.

Exporters and importers are both equally impacted by exchange rate volatility or currency risk. Companies who predominantly export their goods will benefit from a weakening currency as this will make their goods cheaper for foreign buyers. Similarly, companies who obtain a large percentage of revenue from foreign operations would benefit from currency weakness as revenue will automatically rise once it is converted back to the home currency (i.e. the rand). For importers and companies who make most of the payments in foreign currency the opposite applies.

In countries that are typically large net exporters, such as Japan, currency movements can also be a significant driver of the stock exchange. The Nikkei has recently benefitted significantly from aggressive monetary and fiscal policy plans which have caused the yen to weaken considerably against most major currencies. Export driven companies listed on the Nikkei surged as a result of the weaker currency and were the key drivers in pushing the Nikkei index higher (see chart below). 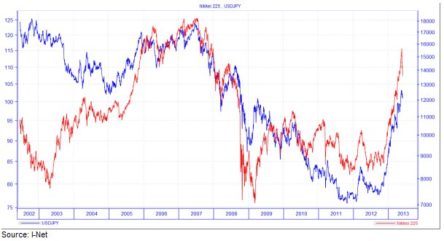 Many market commentators have long anticipated a blowout in the rand in light of South Africa’s large current and fiscal account deficits. One of the key reasons the rand has however remained reasonably strong was due to large foreign inflows into the South African bond market (see chart below). Inflows were driven by ultra-low bond yields globally resulting in a global search for yield and by South Africa’s inclusion into the Citi World Government Bond Index. Labour unrest may have been branded as the reason for the fall but the risks to the currency have been prevalent for some time. 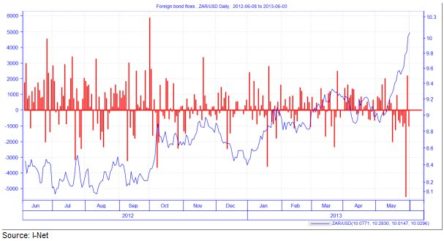 In South Africa the opinion on an optimal level for the rand tends to be a little mixed. Local exporters do certainly gain from the weaker rand but as a country which typically imports more than it exports (hence our frequent trade account deficits) the weak rand often tends to hurt South African consumers. A weakening rand puts pressure on the local oil price, which as a large import item affects all aspects of the South African value chain and is a key driver for inflation. Other popular import items such as electronic equipment and clothing will indeed also be more expensive which, depending on whether these added costs are passed onto the consumer, may impact consumer spending.

The weakening rand was recently cited by the reserve bank as one of the key upside risks for inflation. The reserve bank’s primary aim remains keeping inflation within the target range of 3-6% so one would understand their hawkish view on the rising currency. If inflation were to rise beyond this level the reserve bank would certainly be under pressure to raise interest rates, which would in turn directly impact bond prices and the fixed interest portion of your portfolio.

Many unit trust funds benchmark themselves against the ability to achieve a return higher than the inflation rate, also known as a real return. Real returns are calculated by comparing the nominal return less the inflation rate, so rising inflation immediately diminishes the real returns obtained from your investment. Rising inflation therefore puts further pressure on the fund manager to seek yield or return enhancing instruments in order to achieve their return objectives. In an environment with very low interest rates this becomes even more difficult so fund managers need to the balance the importance between achieving a return target versus adding more risk to the portfolio.

Another key area in which the currency movements may have impacted you is through your investment performance. A large percentage of multi-asset class funds have fully utilised their foreign assets allowance and have benefitted from this. Some have chosen to hedge out currency risk while others have remained fully exposed to the currency volatility. Any un-hedged foreign currency would have certainly benefitted fund performance, despite a mixed period for global equities.

Local equity markets have generally benefitted from the currency weakness with the All Share ending May at another record high. Key winners during the period were the resources and rand-hedge counters. Stocks deemed as rand-hedge are typically companies that generate much of their revenue in foreign currency or from places other than South Africa. Examples of these companies include the likes of South African Breweries, Richemont and British American Tobacco.

Bonds experienced a bit of a sell-off during the period as foreigners were strong net sellers of South African bonds during May. This was one of the key drivers of the currency weakness. This drove up bond yields and hence hurt bond prices (see chart below). Property stocks, which have a strong correlation to bonds also suffered badly.

Very few (if any) are able to predict the movement in exchange rates, especially the timing thereof, and the vast majority of asset managers are cognisant of this fact. Currency risk may be difficult for many to accept but it certainly serves as a diversifier in any portfolio. The recent period of volatility may have brought fear to many investors but it has once again illustrated the benefits of holding a diversified portfolio. It has also reminded investors that risks in the market are often not as apparent to all and that in liquid markets, such as ours, foreign investors can sell assets just as quickly as they can buy them.