You are Here > Home > Borrowing > Is the credit bubble just changing shape? 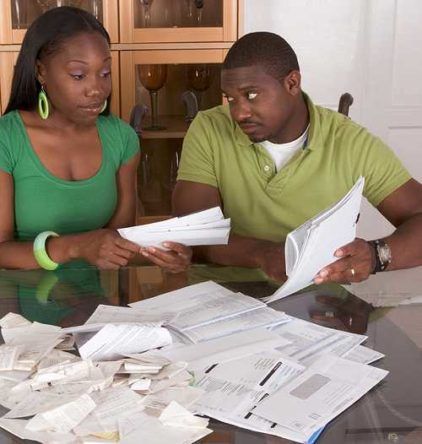 When recently presenting on the SA Banks, it dawned on me – the industry as a whole, and the consumer in general, came out of our recent unsecured credit bubble (as it is now referred to) rather unscathed. Sure, you had the unfortunate failure of ABIL, but in general, non-performing loan ratios at the banks are still trending downwards. Capitec is printing earnings growth of 20% plus, and is back to trading on a price-to-book multiple in excess of five times. Retail sales growth, given the circumstances, seem reasonably robust. Could it be that we just took this credit bubble in our stride?

A risk in the financial sector tends to be rather persistent. It never just disappears. Unless you see a definite fallout, it takes a long time to work its way through the system. Or, it may move from one sector to another, morphing into something new. Think about how risk was transferred from corporates to sovereigns post the global financial crisis. Or in SA, how long it took the banks to reduce their 2008/2009 non-performing mortgages. To this day the SA banks complain about their mortgage back-books. With this in mind, I think one should take a second look at what is transpiring in the unsecured credit market.

When referring to retail unsecured credit, we generally refer to personal loans. While this is a large component of unsecured lending, and a product where we saw stress over the last couple of years (typically the space ABIL played in), it is by no means the only category of unsecured lending.

Using the quarterly National Credit Regulator (NCR) data, where all registered credit providers (retailers, banks etc.) with disbursements of more than R15 million per annum are required to submit information, unsecured credit transactions, generally what we would refer to as personal loans, comprise around 45% of total retail unsecured credit granted in SA. Credit facilities, typically credit cards or overdrafts, contribute another 45%. And lastly, a category called short-term credit transactions, makes up the remaining 10%. The latter is defined as amounts not exceeding R8 000, repayable within six months – in many instances your typical payday loans.

To get a comprehensive view of the unsecured market we should look at all three categories. This is where our tale takes an interesting turn. Figure 1 shows the year-on-year growth in credit granted in each category. Personal loans and credit facilities peaked at growth rates of around 60% in 2011, the height of the unsecured bubble, but have since systematically reduced, hovering around negative to flattish growth – no concerns here. But short-term credit seems to be ballooning – now growing at 150% year-on-year. We see a sudden surge in this product since the end of 2014. 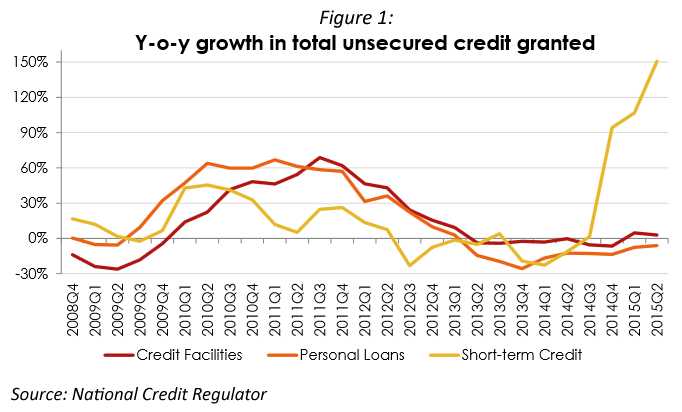 Storm in a teacup?

You could argue that this is only 10% of the unsecured credit market – so a storm in the proverbial teacup. But, consider this: per the National Credit Act (NCA) credit providers may charge interest of up to 5% per month ‒ yes, effectively 60% per annum ‒ on these short-term loans. That is on top of charging an initiation fee that can range between R171 and R1 140 each time a new loan is taken out and a monthly service fee of R57 while the loan runs (all including VAT). Remember the maximum loan amount is only R8 000.

A further important point, payday loans do not show up as large balances on credit providers’ balance sheets. Typically, as the name payday loan would suggest, they are rolled from one month to the next, effectively functioning like a credit facility – except that the borrower incurs the upfront initiation fee each time, and a much higher interest rate of course. Currently products defined as true credit facilities as per the NCA carry an interest rate linked to a repo rate multiplier, currently 23% per annum – a far cry from the 60% on payday loans.

Why would a borrower be willing to pay such exorbitant interest and fees? In reality we don’t know the full answer. But, a fair conclusion would be that some consumers are desperate – they are over-indebted and need to make ends meet. Figure 1 clearly shows the pullback in other forms of unsecured credit. Short-term Credit could very well be a form of last resort borrowing for some – a case of borrowing from Peter to pay Paul.

And like most things in life, this coin has a flipside. Providing a loan has supply and demand forces. Let’s look at the supply side.

At the end of June, the SA Department of Trade and Industry (DTI) proposed revised caps on interest rates charged on all credit transactions. The document addressed all fees, but one of the most significant changes would be to the maximum interest rate charged on unsecured credit transactions (personal loan type products), which would effectively lower the current maximum rate of 32% to 25% per annum.

With a lot of borrowers being priced at the cap, the industry responded by voicing concerns around not being able to price for the risk it takes in certain segments ‒implying that they will simply stop writing higher risk business and that these consumers will be forced to turn to unscrupulous players outside of the formal credit market.

Whilst I agree with these views, one must concede that banks are businesses, operated to generate a profit, and that the proposed cap would impact the profitability of personal loans, all else being equal. A business will react as a business should, and try to protect its profit margin. It therefore comes as no surprise that a lender such as Capitec, which only grants unsecured loans, is shifting its product mix towards shorter-term, higher-margin products.

Capitec is now writing 32% of its new business with a loan term shorter than 12 months – bear in mind that this was only 21% a year ago. I suspect that a large portion of these shorter-term loans would be your typical payday loan products, carrying high interest rates. 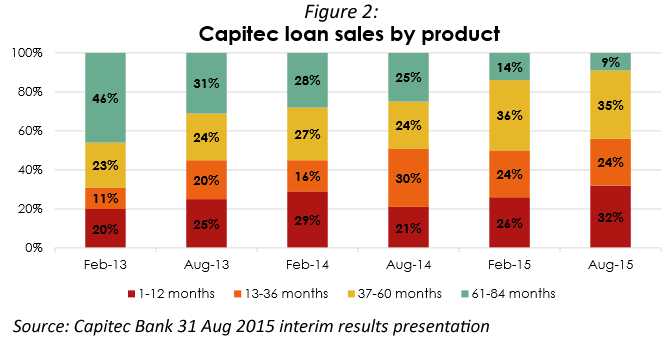 The proposed caps might not be the only reason for this shift, but I think that it is playing a role. Either way, Capitec is evidently targeting the short-term credit market more aggressively. They are not alone in this, given the growth rates seen in this space.

So where does this leave us?

As I said earlier, risks in the financial market don’t disappear. Consumers don’t just deleverage overnight because one financial institution is placed under curatorship, or because the banks start pulling back on one type of loan product. In my view, there is a very real possibility that the unsecured bubble is still with us – maybe to a lesser extent than before (payday loans are smaller in value). Maybe it is no longer as pertinent at the larger banks (Payday Loans are small for the Big Four), but it is still here.

Consumers are feeling the pinch, resorting to more expensive forms of credit to fund consumption. Whether this is due to supply side or demand side forces, or a combination, doesn’t really matter. Aggravating the problem are rising interest rates and slowing economic growth. I expect that we will see a fallout in short-term credit at some point. This might even have a broader impact, manifesting in lower retail sales growth, or resulting in higher defaults in other products (consumers with a payday loan may have vehicle finance or a credit card). But, I think the outcome will ultimately be negative.

The original article appeared in Funds on Friday by Glacier Research.