How the JSE has changed over time

Looking at the JSE super sectors, it is extremely interesting how their contributions to the JSE Top 40 index have changed over time. In part, this reflects the changing fortunes of the sectors in the South African economy, but there are other factors at play here too.

The percentage split between the four super sectors – financials, industrials, REITs (property) and resources – from 1999 to date are shown in the graph below. 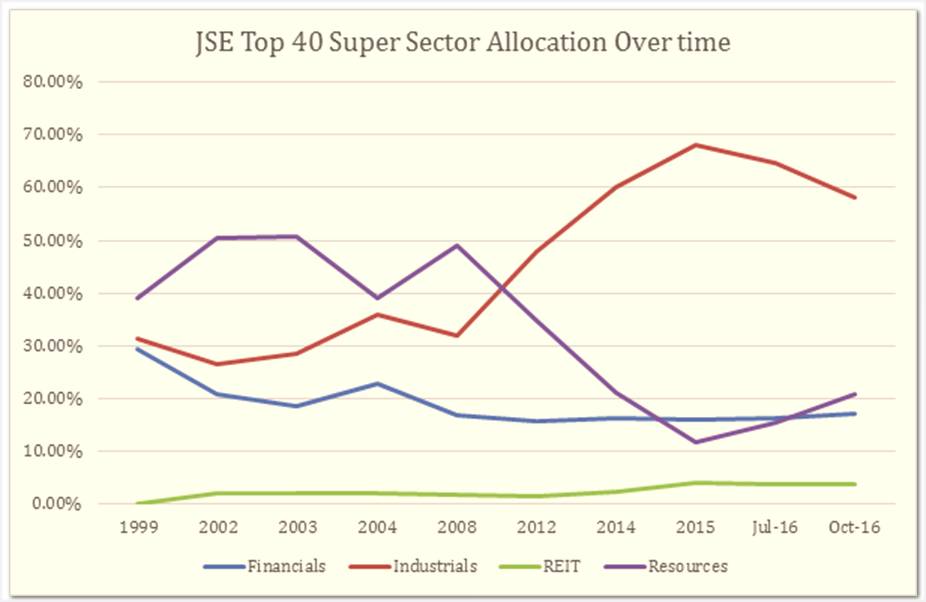 We can see that industrials went from 31% of the Top 40 index to a peak of 70% in 2015. The key drivers of this were our large global industrial firms (notably SAB, Naspers, Richemont) as well as investors favouring firms that have offshore exposure.

At the same time, the resource share weighting in the Top 40 index has shown a completely inverse trend to industrials, falling from over 50% in the early 2000s to a low of 12% in 2015 and slowly ticking up to reach just over 20% in October 2016. This recent move has been propelled by recovering resource prices as well as the removal of SAB Miller from the index (AB InBev, while listed on the exchange, is not in the index, nor is BAT).

Over this period, financials’ share of the market has been mostly flat at about 15% of the index after coming off the high of the financial services bubble that burst in the last 1990s. And, of course, property stocks have slowly risen as the property sector has mushroomed, with some large property stocks making it into the Top 40.

These trends are instructive and speak to the changing nature of our economy and investment markets as well as providing some insight into lost opportunities and offering some future lessons.

Firstly, they indicate that South Africa missed the global commodity super cycle boom, largely as a result of policy uncertainty and a lack of reliable infrastructure, a point that was made by no less than Mineral Resources Minister Mosebenzi Zwane at this year’s Mining Indaba. Investors have shied away from South African commodity companies, opting instead for global competitors. During the global commodities boom – which lasted from 2004 to 2011 – in South Africa, resources’ contribution to the Top 40 Index actually slipped.

And things have not improved. On the contrary, from having been above 50% at one stage, resources are now down to a shockingly low 20% of our investable universe, this in a commodity-driven economy. And worse, although commodity prices have risen somewhat recently, further upside seems limited by low global growth.

With investors and company management spooked by corruption and government policy post the 2009 Zuma administration election, they have looked to externalise their business and investment as much as possible. While the listed industrial sector on the JSE ostensibly grew, our economy de-industrialised. In 2006, manufacturing accounted for 16.3% of GDP. Today it accounts for just 12.5%. Increasingly the market no longer looks like the actual composition of our economy.

And so, while it would appear that the recent fall in industrial stocks and rise of resource counters in the index signal the opposite, I believe the trend to externalise our listed corporate earnings will continue until policy pragmatism and certainty returns. Unfortunately we are not seeing this. A good example is the Mineral and Petroleum Resources Development Act (MPRDA) Amendment Bill, No 15 of 2013 which empowers the Minister of Mineral Resources to designate “strategic minerals” and then set their selling price to support local manufacturing. Even government understands that BMW would not build any manufacturing plants here if the Minister of Trade and Industry reserved the right at his discretion to set the price of BMW cars, yet this is exactly what policy is doing in one of the most critical sectors of the economy.

Over the past 10 years, the JSE has increasingly become an “externalised” exchange given the local political and economic environment. This can be well seen in the nature of firms listed on the bourse. If we are to achieve the goals of inclusive economic growth, which will also propel the prominence of local business in the market, we need policy pragmatism and stability.

This press release was issued by BayHill Capital. A member of the Peregrine Group, BayHill Capital is a niche investment company that offers bespoke portfolios for private clients.