You are Here > Home > My Money > Better to own a car or to simply Uber?

Better to own a car or to simply Uber? 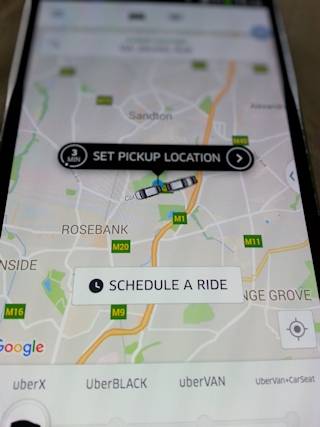 If you are looking for ways to save in 2017, you might want to consider tossing your car and Ubering instead. MyTreasury.co.za, which helps South Africans find the best savings account to match their needs, crunched the numbers to see when it makes financial sense to own a car as opposed to using Uber.

“My Treasury.co.za is committed to using data analysis to help South African consumers make more informed financial decisions and the answer is actually really simple,” says Michael Kransdorff, chief economist and co-founder of MyTreasury.co.za, “If like many South Africans, you drive less than 50km a day, using an Uber will save you money.”

Total cost of owning a car

MyTreasury.co.za based its calculations on a Toyota Corolla 1.8 Exclusive, one of the more common cars used by UberX drivers, and came to the conclusion that the annual cost of car ownership for the average South African driver works out to R111 000. This number was arrived at as follows:

Depreciation: A car depreciates in value over time. Although a car is technically an asset, it’s not an investment. the Corolla 1.8 Exclusive sells new for R300 900.  The car’s depreciation and financing costs are around R61 000 per year. This takes into account that you are able to finance the car over five years at prime and sell it at the average market price after five years.

Insurance: This is the most significant added cost of car ownership. One of SA’s largest insurers gave a quote of R1 500 per month (R18 000 per year) for comprehensive insurance with a minimal excess.

Parking: The bane of a driver’s life is parking fees. If parking at home and at work is free, parking fees are estimated at R1 560 a year.

Cleaning: If you pay to have your car washed once a month, at an average of R150 per wash, it costs around R1 800 a year.

Licences, fines, tolls: These were estimated at R2 000 per year.

Petrol: Petrol costs depend on your driving patterns, but MyTreasury.co.za worked out a standard of R27 000* a year for the average South African driver.

Cost of taking an Uber

Whereas owing a car comes with many fixed costs ‒ costs you incur regardless of how much you use the vehicle ‒ by comparison, all your Uber costs are variable. You pay only for what you use. The cost of taking an UberX is R7.50/km + 75c/minute. In average urban traffic conditions, the average cost per km is calculated at R9.

But any sound financial analysis doesn’t only consider what you spend, but also takes into account what you gain. So what are the benefits of not being stuck behind the wheel? As an Uber rider, you’re freeing up time to organise your life: make calls, send WhatsApps and finally clear your inbox. MyTreasury.co.za calculated this is worth about R2.50** per kilometre.

The money saving benefit of using Uber comes down to how much you drive. With your own car, the less you drive, the higher your cost per kilometre. That’s because of the high fixed costs of car ownership. By contrast, with Uber your cost per km is constant.

If you drive less than 50 km per day (that’s 1 500 km per month or 18 000 km per year), selling your car and using Uber will save you money.  There is the loss of instant convenience of car ownership – you might have to wait 5 minutes for your Uber – although it takes many people that long to find their car keys.

How much will you save?

“We calculate that the average South African, driving 40 km per day (14 575 km per year), would save as much as R14 000 per year by ditching their car and switching to Uber. The real winners are those who live close to work. For these commuters, Ubering would translate into even bigger savings.

* Petrol calculated as follows: The petrol price is currently R12.79 a litre in Gauteng. The average fuel consumption of the Corolla is 7 km per litre. Thus the average cost of petrol is R1.83 per kilometre.  The Road Traffic Management Corporation estimates that South African car drivers drive on average 14 575 km per year. Assuming drivers are operating in standard urban traffic conditions, MyTreasury.co.za estimated this will result in R27 000 spent on petrol a year.

**Time saving calculated as follows: MyTreasury.co.za assigned a numerical value to this time by considering the hourly rate of a R320 000 annual salary. That comes to R150 per hour. Being conservative and assuming only half the commute time is productive (with the rest of the time spent gazing wistfully out of the window or making small talk with the driver), an average South African driver would save 485 hours a year using Uber. That’s a very significant 40 hours per month.

This press release was issued by MyTreasury and Uber. New Uber users can get R50 off each of their first two rides using the promo code: MyTreasury.