You are Here > Home > My Banking > Have we made it too easy to dispute debit orders?

Have we made it too easy to dispute debit orders? 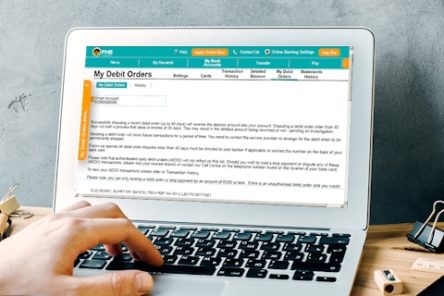 The move by banks to make it easier for individuals to reverse unauthorised debit orders has been an important step in maintaining the integrity of the banking system, especially after increases in illegal debit orders where syndicates would obtain bank account details and illegally deduct money from people’s accounts using the debit order system. Smartphone banking apps introduced by FNB and Capitec have made it easier for individuals to track the debit orders going off their accounts and immediately reverse any unauthorised debits.

However, with the economic downturn, many bank customers are using the debit order dispute resolution system to cancel legitimate debit orders in order to manage their cash flow.

Walter Volker, CEO of the Payments Association of South Africa (PASA) says while there has been a significant increase in the number of disputed debit orders, the vast majority are legitimate – in other words a formal mandate is in place for the company or service provider to deduct the funds.

“From an industry point of view, we have seen an increase in the number of debit order disputes recently and our data indicates that such disputes are mostly as a result of consumers disputing valid mandates rather than users inputting invalid mandates into the payment system.  At the same time, we are aware of the fact that a number of banks have introduced various technological functionality and process enhancements to service their customers better.  It is possible that some consumers are abusing such technological innovations to more easily dispute valid debit orders,” says Volker.

Benay Sager, chief operating officer for the IDM Group which owns debt counselling firm DebtBusters,  says approximately 70% of disputed debit orders come from consumers who bank with FNB and Capitec since the introduction of their banking apps and they have approached both banks to find a resolution. In response FNB has reduced the amount that one can reverse via the app to R200. For amounts above R200 customers must call the call centre or visit their nearest branch.

Charl Nel, head of communications at Capitec says the bank will be sending their debit order clients regular SMSs indicating to them that disputing a legally and correct debit order will affect their credit score in the long run and might curb their access to additional credit in future. However, the bank feels very strongly that it needs to continue to provide an easy mechanism for customers to deal with the “menace of unauthorised debit orders plaguing our clients”.

Finding the balance between protecting customers against criminals whilst ensuring that people meet their financial obligations will remain a challenge until the implementation of the authenticated debit order system which is currently being developed by PASA.

According to PASA, with Authenticated Collections, consumers will electronically confirm to their bank that they agree to the details of the specific debit order. Once the customer has authenticated the debit order, the bank will check the debit order payment instruction from the company/user against the authenticated mandate to ensure that the debit is within the parameters agreed to, prior to processing. At this stage the process will only be implemented for Early Debit Orders (NAEDO), and not for normal debit orders as early debit orders are primarily the area with the highest experience of fraud. Early Debit Orders also experience the highest rate of disputed debit orders.

“Authenticating all Early Debit Orders is a means to protect consumers from unscrupulous companies who attempt to debit consumers’ bank accounts without their permission,” says Volker. “As a result, consumers will know who is debiting their bank account, when they will debit and how much will be debited. At the same time, this new system will also protect companies in that authenticated mandates will not be easily reversible at the payer’s bank.”

The pilot phase will start in June 2017 and all new early debit order contracts will have to be authenticated. From there companies have another 18 months to convert debit orders to the new system. The final phase is expected to be in January 2019.