The myths and truth about forex trading

Forex trading has taken on mythical dimensions, with many believing it’s a way to trade themselves out of poverty and into riches. What is the truth? 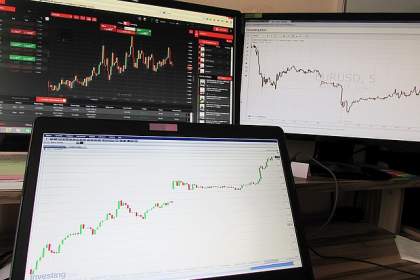 “I run an online share trading platform and I don’t consider myself a forex trader; in fact, I would not want to try make a living out of forex,” says Brett Duncan, Head of Retail Equities at Standard Bank, explaining that the marketing of forex trading as a means to ‘get rich quick’ is extremely misleading.

Forex or FX are abbreviations for foreign exchange. Forex as an asset class is extremely important; it is the most liquid and largest market and is how money is transferred around the world. A bank may, for example, buy and sell forex for a large importing company which needs the foreign currency for a large product or service order that has to be paid in that currency in a month’s time. The company might use forex trading as a hedge in case the rand weakens, which would increase the end price. Forex trading can also be used as part of a trading strategy where your portfolio may be over-exposed to one currency and you wish to diversify, or you believe that a currency will devalue due to political or economic events.

The concept of forex trading as an investment strategy within itself has to do with the ability to gear one’s position, where a small movement in the currency can result in a massive gain, or loss. For example, if you have R10 000 and want to take a position that the rand will depreciate against the dollar:

If the rand strengthened to R13, however, your loss on R10 000 is R3 700 – over a third the value of your initial outlay. If the rand were to strengthen to R12.50, nearly 80% of your entire investment could be wiped out. In this scenario, the gearing was 10 times, but the higher the gearing the easier it is to lose money.

The ‘get rich quick’ schemes will often punt high gearing as a way to double your money overnight, but what they never tell you is that a single trade can wipe you out – and no-one ever gets it right consistently.

For example, if you used 100 times gearing so that your R10 000 bought you exposure of R1 million, and the rand strengthened to R13, you would lose R37 000 – three times your investment.

In the recent Standard Bank Webtrader currency trading competition, the winner Ricky Jacobsohn turned US$100 000 into over $US1.3 million in just 30 days. This is the type of headline that has given forex trading its mythical status as a get-rich opportunity.

But if you delve a little further, you discover that 20% of the 1 300 participants in the competition lost more than 20% of their virtual investment, and only 5% made a 50% profit. The likelihood is that even those 5% would have seen their luck change if they continued to trade. Jacobsohn acknowledged that if he had been investing his own money, he would never have taken the gearing and risk that he did for the simulated trade.

Why a weekend course won’t make you a forex trader

Any real trader will tell you that spending a weekend learning the “secrets of trading” will not make you a trader. Only experience will.

As Simon Brown of online financial education site JustOneLap.com explains, forex trading is more or less a zero-sum game: for a trader to make money, somebody else needs to lose. “Being the most liquid market in the world, the best traders in the world gravitate to forex, so you need to beat the best. This will take time.”

Duncan compares forex trading to learning to drive a car. If you try drive a car for the first time after reading the learner’s license manual, you are going to have an accident. “You need to invest a few years in education. If you are not willing to do that, you will have an accident.”

Duncan warns that in these types of weekend courses, which can charge participants anywhere from R10 000 to R20 000, they use hindsight to convince people how easy it is to make money. “Hindsight is wonderful as you can show where you should have bought and sold. It is very easy to show in a demonstration,” says Duncan who adds that what they don’t tell you is that in reality the currency can move in any direction. “People often mistake luck for genius.”

Duncan adds that many of these courses or online forex platforms convince you that they have algorithms or trading systems that can beat the market. The reality is that they are trading aggressively, closing positions daily which just adds to the cost of trading. “If there is a minimum trade fee of $10, that will add up every time you close or open a position. People say they have made a trading profit, but when you look at the costs, they usually haven’t,” says Duncan. So basically, a platform that encourages a high trading strategy is there to make money out of you.

Duncan says people also don’t understand the costs of carry, that is the interest rate you effectively pay for holding a positon. He explains that if you take a position that the dollar will strengthen against the rand and you are paying a 10% interest rate, then the rand must depreciate by more than 10% in order for you to make a profit.

Why no-one can guarantee you a return

There are many companies claiming to be able to guarantee returns from forex trading. They usually claim they have an algorithm or robot that allows them to do this. The recent arrest of the founder of forex trading company Profit Trading illustrates how spurious these claims are and that these companies are usually fronts for elaborate Ponzi schemes. In the case of Profit Trading, an investigation by the Financial Services Board found that not one trade had ever been placed.

Duncan says that markets are highly efficient and even if someone has developed an algorithm, by the time it is widely marketed, the market will have discovered it and be trading against it.

Elaine Mabiletsa who works at the JSE as a specialist on bonds, currencies and interest rates derivatives, says what investors don’t realise is that forex trading is very high risk and for every winner there is a loser. “Not even a bank with all the access to information and research consistently makes money out of trading currency. For someone to pretend they have developed a system that consistently produces profit is impossible. If they had, they wouldn’t be trying to sell courses and software to people – they would be too busy making billions,” says Mabiletsa.

The very nature of trading is that you win some and lose some, so a claim that a fund can deliver a constant monthly return is false and a sure warning sign it is a scam.

How to legitimately trade forex

Get used to trading without gearing: Duncan believes that a new trader should never start with geared forex – they need to first get used to trading on a non-geared basis. “Go buy a forex ETF and get used to it. Even add some shares and learn about trading before you have a go at forex,” he advises.

Trade virtual money first: If, however, you insist on short-circuiting the process and go for geared forex trading, then at least start with simulated trading where you can experience forex trading before investing real money. Only do this on a trusted platform, however, as there are many scams on platforms that falsify your trades making you think you are making money, thereby luring you into committing real funds.

Only use credible platforms: There are several credible platforms in South Africa where you can trade forex so there is absolutely no reason to sign up with an unregulated and dodgy platform. These include Standard Bank’s Webtrader, Sanlam iTrade and PSG online. All of them use the Saxo Bank trading platform but offer different interfaces and educational tools which can include online tutorials. Global Trader and IG.com also offer forex trading. Global Trader is owned by the JSE-listed Purple Capital Group and IG is a UK-listed company with offices in about 15 countries, including South Africa.

The benefit of trading through stockbroker platforms is that you also have access to international shares and ETFs. You can build up a more holistic portfolio than just forex trading if you wish.

Educate yourself: Simon Brown says that making money from forex trading – indeed even making a living from forex trading – certainly is possible, however, the idea of it being easy and quick is not true. Like any skill, it takes time to learn the techniques and strategies. “One also has to learn risk management and then the hardest part is managing the psychology – the wild emotions of fear and greed. Expect this learning curve to be measured in years,” says Brown who recommends reading Trading in the Zone by Mark Douglas and Reminiscences of a Stock Operator by Edwin Lefèvre.