The murky world of loan sharks

Once you borrow money from a loan shark, you will be indebted to them for life. 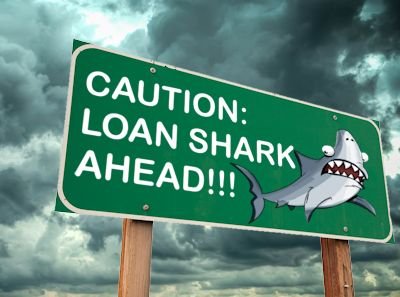 City Press has received an increase in the number of readers complaining about loan sharks as illegal moneylenders or mashonisa operate across the country, using threats to collect payment, keeping customers’ bank cards and IDs, and charging interest rates so high that the client will never be able to pay it off.

“I am a victim of a loan shark. They are very aggressive if we don’t pay or miss a month. I cannot report them as they will come after my family. They are making thousands from us if we borrow a mere R3 000, we end up paying like R60 000,” wrote one reader.

In another case a reader’s wife borrowed money from the local moneylender and the interest rate is so high she cannot afford to pay off the loan. “The interest she is paying is 50% in a month so on a loan of R1 500 she is paying an amount of R750 every month. Already she has paid R6 250 but still owes more. My concern is that she has paid many times more and she still keeps paying. My kids are suffering because of this madness,” her husband wrote to us in desperation.

It is against the law for someone to lend you money if they are not registered with the National Credit Regulator.

A father wrote to City Press desperate because his son’s life was at risk due to a loan shark. “He borrowed R1 000 at a 50% interest rate. The debt has ballooned to R15 000 and it is growing at an alarming rate. On the day he is supposed to pay back the money the loan shark locks the gates and releases the dogs so you cannot get there to pay. We cannot go to our police station as they are involved.”

Apart from physical threats, loan sharks are also taking people’s ID documents and bank cards, which is completely illegal. Another victim borrowed R7 000 from a loan shark and had to pay the interest of R3 500 by the end of the month. “Unfortunately, something came up and I could not make payment.  He is now telling me I must give him my bank card and identity document so that he can be sure he will get his money.”

As these testimonies prove, if you borrow from a loan shark they will own you as you struggle to meet their terms. The business case behind a loan shark is to have clients who never fully pay off the loan but just keep paying that 50% interest each month – this creates an income for them many multiples of what they lent out initially and they ensure that those payments keep coming by threatening your life or taking your bank card to draw the money.

The first thing to know is that it is against the law for someone to lend you money if they are not registered with the National Credit Regulator. In 2015, amendments were made to the National Credit Act (NCA) which require anyone lending money to be registered as a credit provider. Previously someone could lend money without being registered as long as the credit provider had fewer than 100 credit agreements in place or lent less than a total of R500 000. However, loan sharks were abusing this provision and the amendments were introduced to close the loophole. Although it is impossible to ever stop underground lending, it allows the National Credit Regulator (NCR) to investigate complaints and refer cases to the National Consumer Tribunal for prosecution.

In a previous interview, Lesiba Mashapa, company secretary at the NCR told City Press that “one of the biggest challenges is that some communities themselves protect these loan sharks as in this weakening economy they offer the only access to credit. However, the change in legislation will make it easier to shut them down and more difficult for the loan shark to collect their loans as they will be illegal.” Since 11 November 2016, the failure to register as a credit provider could result in the credit agreement being declared void as an unlawful agreement.

The challenge, as Mashapa points out, is that loan sharks are either protected by the community or people are too scared to report them for fear of their lives. In the case of the father who wrote to us, he claimed that the local police were involved with the loan shark’s activities.

In every communication from our readers they have insisted on anonymity for fear of retribution. However, the National Credit Regulator cannot investigate unless a formal complaint is made.

Nosipho Zikishe, supervisor in the complaints department at the NCR says that any complaint will be attended to without exception and assures that the identities of victims of loan sharks will be protected. In the cases where bank card or ID documents are withheld, they will involve the police; this will not be the local police station but part of the commercial crimes unit. “The issue of unregulated credit providers is an issue for the NCR. If we receive information we investigate. We conduct raids in partnership with South African Police Service and make arrests,” says Zikishe.

Loan sharks are parasites on our society, making a living out of desperate people. We cannot live in fear and we need to report these activities.

How to complain to the NCR

If you wish to lodge a complaint you need to complete Form 29. This is available on the website www.ncr.org.za , or by emailing complaints@ncr.org.za or calling 011 554 2700.

When completing the form, you will need to include your details as well as information on the loan shark. Zikishe says that the NCR aims to provide feedback on written enquiries within ten working days. If you had not received a response by then you need to escalate by contacting the call centre.