You are Here > Home > Saving > Sneakers or saving?

A few weeks ago, a young man named Kuhle asked me a very simple question: “If I got a R3 000 windfall should I use it to party, to buy sneakers or to save?” 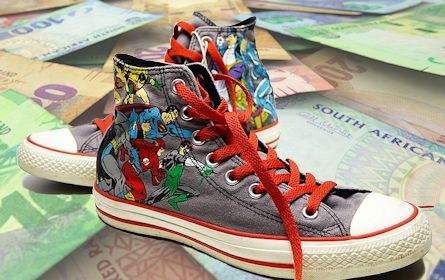 My automatic, gut response is: “Save it all!” But that answer is not going to resonate with a 21-year-old who wants to impress his friends, find a girlfriend and who thinks he has years ahead to save.

So, I had to give this some extra thought. Let’s acknowledge that there is a need in all of us to enjoy our money and to impress those around us, so how do we do this but also create opportunities for our future?

My recommendation to Kuhle is to spend time thinking about how spending the money would make him feel.

Let’s start with the party spend. Can he estimate how much money he has spent on entertainment in the last year? And if he added that up all together would he honestly feel that it was a good investment in himself? Probably not – in fact he would undoubtedly be very surprised at how much he had spent on entertainment and could probably not remember who he was with, or which people he impressed. Perhaps he would feel that spending half that amount would have given him as much enjoyment.

Then there are the sneakers. Kuhle admitted to me that he already has several pairs of sneakers but that they are no longer “on trend”. So, we can understand from this that Kuhle wants to look good and stay in fashion, but it also shows that the value of sneakers deteriorates very quickly in line with fashion changes.

If Kuhle had to add up how much he spent on the sneakers currently in his cupboard, does he feel that those were worth the money? To some extent they probably were, but maybe a pair of sneakers could have lasted just a few months longer and instead of having four pairs of sneakers that are now out of fashion, he could have three.

So now let’s look at savings. If Kuhle calculated how much he spent on entertainment and sneakers in the last year and took just half that amount and put it into saving – how would he feel having that amount tucked away as an investment? Probably a lot better than not having it at all. So, it is not an unreasonable statement to say that in a year or two, having savings or an investment would make him feel better than more sneakers he can’t wear or parties he has forgotten about.

So the choice comes down to immediate versus delayed gratification. As humans we tend to be more immediate in our emotional responses. So how about a compromise? How about Kuhle takes half the money and starts an investment in a tax-free savings account. He makes a promise to himself that every time he gets another windfall, he will add half to his investment account. If he keeps doing that from a young age, the power of compounding will make sure his money is working harder than he is and one day when he has a really big dream, he will have the money to fund it.

In terms of whether the other half goes on entertainment or sneakers ‒ well the utility value of those sneakers is probably higher: he can spend less on entertainment but make a bigger impression when he goes out. And if he wants to boost his Instagram status how about a photo of his investment account with the caption “millionaire in the making”? Trust me ‒ that will impress the potential girlfriend far more than the new sneakers!