You are Here > My Investments > Cryptocurrencies and their revolutionary architecture

Cryptocurrencies and their revolutionary architecture 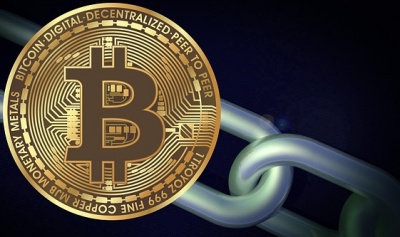 Investment experts have often sceptically dismissed cryptocurrencies as excessively volatile. Technologists have described them as revolutionary. Who is correct? Will cryptocurrencies become a mainstream asset class?

First of all, investors shouldn’t fall into the trap of confusing cryptocurrencies with the technologies that make them possible. Blockchain, the technological architecture underlying cryptocoins is, for now, far more important than the hundreds of emerging digital currencies.

At the time of writing there are more than 1 700 cryptocurrencies with a total market capitalisation of 215 billion USD1. Bitcoin, the best-known and largest example, accounts for more than 48% of the total market cap. In early August, the US Securities and Exchange Commission delayed a decision on whether to approve a Bitcoin-backed exchange-traded fund (ETF), pushing the digital currency’s decline this year to 46%2. In twelve months, the original cryptocurrency saw 93% of daily price volatility3, and suffered from a drawdown as large as 68%. 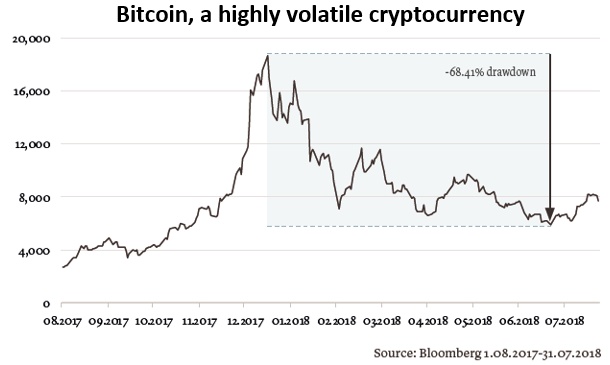 With such volatility possible in the best-known virtual currency, the real value may in fact be the underlying architecture or technology – blockchain – that makes it possible to trade cryptocurrencies.

Blockchain is best defined as a digital ledger software that provides a verifiable public record of every transaction. It stores individual transactions in blocks (sets of data) attached to other blocks in an encrypted and chronological order to create a secure chain. Every user can be sure that every other user is seeing exactly the same thing, with no intermediaries.

Blockchain is not a product nor a service; it’s a revolutionary way of organising, recording and distributing information. Immediate applications are in logistics and inventory management as well as compliance and account reconciliation, limiting the scope for human error. Companies large and small are experimenting with this technology as it allows us to simplify much of what was complex or prone to error or fraud through traditional paperchains and digital databases, and this is a key breakthrough.

The irreversible nature of transactions has profound implications for the finance industry, and the most promising uses could be in post-trade reconciliation. But while the hopes for blockchain’s revolutionary impact are high, deployment is taking time and investors seem to be overestimating the speed of adoption.

Since we last wrote on the subject one year ago, institutions such as the Nasdaq and the Australian stock exchange ASX, have communicated about the adoption of blockchain, but scaled down their plans for immediate implementation4. This is due to the complexity of financial processes and the lack of agreed standards. But as operational set-ups progressively adapt, we expect more blockchain innovations and applications in the medium term.

And while blockchain is developing, cryptocurrencies are facing their own set of challenges. One of the constraints at the moment is that investors lack a single source of market intelligence for all currencies. The situation is a little like the fixed income market before the arrival of the Bloomberg terminal when there was little transparency or price data and investors had to call brokers for quotes and prices were set by a small group of dealers.

And if pessimists about the technology are right, governments will sooner or later take an interest in tracking cryptocurrency transactions. That would rule out cryptocurrencies in their current forms ever replacing fiat currencies, which are essentially tender that a government defines as something that you have to use and accept.

That doesn’t prevent cryptocurrencies being used by investors as a hedge against turbulence in fiat currencies and to avoid capital controls. Nor has such thinking prevented governments including the US and Germany setting out guidelines for declaring capital gains for tax purposes. In the US, for example, Bitcoins are taxable as property and the European Union’s Court of Justice has found that virtual currencies are exempt from value added taxes because they are a means of payment.

The central question in the debate about cryptocurrencies isn’t whether they will become, in time, part of the investment landscape, but rather, whether their use will reach a critical mass and what governments would then be willing, or able, to do to regulate and tax their exchange.

It seems to us that over time, volatility in cryptocurrencies may decline as they mature, becoming more widely used and exchanged. That depends on their supply remaining limited (Bitcoin for example is limited to a total supply of 21 million, compared with 17.1 million in circulation today) and cryptocurrencies continuing to be fully-backed by ‘real’ cryptocoins, unlike fiat currencies held by banks.

Cryptocurrencies are clearly becoming a part of the global financial landscape. But for now, regulators and central banks are resisting efforts to treat cryptocurrencies the same way as their fiat counterparts. The SEC in the US already denied an ETF listing in July and now has until 30 September to allow ‒ or not ‒ the most recent fund listing to go ahead. And that hasn’t prevented Goldman Sachs Group Inc. looking at providing custody for cryptocurrencies, according to Bloomberg5.

In the meantime, it makes more sense to follow the technologies behind blockchain. And for any investor willing to add a cryptocurrency to their portfolio, the traditional principles of diversification and security apply, as well as the first rule of not investing in anything that you don’t fully understand.

This post was based on a press release issued on behald of Lombard Odier Private Bank.