Angelique Ruzicka spoke to the co-founder of Khula, a start-up that is disrupting South Africa’s farm-to-table supply chain, reaching the Chivas Venture final in Amsterdam. 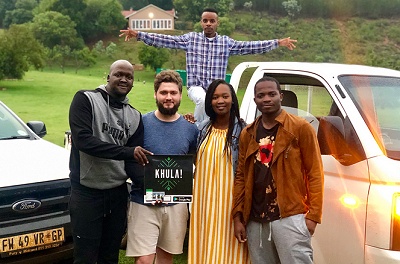 South African startup Khula was the only South African company that made it to the top 15 finalists in the Chivas Venture 2019 competition. The annual competition looks for the most promising social entrepreneurs who are using business to solve social and/or environmental issues.

Although Khlua didn’t win – and didn’t make it to the final five – that hardly put a dampener on co-founder Matthew Piper’s ambitions.

I caught up with him in the media lounge in Amsterdam where the competition final took place. We were granted a 15-minute ‘speed dating’ interview as the top five finalists would soon be pitching in front of judges in a packed auditorium in an X-Factor style round.

While Matthew was disappointed that he wasn’t also pitching, he did come away with $20 000 (about R290 000) in prize money for participating in the competition. He’s already allocated the prize money towards developing the app for his business.

“We have won $20 000 – so in Rands that’s amazing. We are hiring new developers for this at the moment. The prize money pays one developer’s salary for the entire year and though nI may have to top it up, it still makes a huge difference. We would have liked to make it [to the final] but we are doing a lot of other things that are generating revenue.”

The concept behind Khula is a simple one but it solves a big problem in South Africa: how small-scale farmers can make a commercial success of themselves without getting ripped off in the process.

Besides connecting farmers directly with retailers, the app also offers other interactive features. “Product and inventory from all different farmers are tracked. We also do social stuff where farmers can send pictures to each other, send feedback and assist each other ‒ so there’s an educational side to it as well. On the client side they can see an aggregated view of the produce around them and place orders. They can rate the farmers’ products and farmers will get continuous feedback.”

The idea of Khula was conjured up on a chance meeting Matthew and his co-founder Karidas Tshintshol had on a flight to Israel with another entrepreneur. Matthew explains: “She had been in the agricultural industry for about 15 years and she ran a chili processing company. The way she bought produce from surrounding farmers in various communities was very interesting to us. So, we got into discussions about scaling that kind of model to every business that is buying produce and giving them more visibility to small scale farmers who find it difficult to market themselves.”

Before Khula came into existence, farmers were paying fees to various middlemen. “They have three or four middlemen in the process and they all want their cut. The fresh produce market itself takes about 14%. It doesn’t make sense to us when you can go completely direct. We also use the ‘just in time’ principle which means food can go directly to the client without waiting in storage,” says Matthew.

Instead of farmers being squeezed, Khula charges a 10% fee for every transaction on the retailers and the app also enables the business to collect data on farmers which could help banks design better financial products for farmers.

“We’re helping banks understand farmers better and where they can fund farmers for growth and that’s also where we get our revenue stream. Our first client on the data side are Land Bank and we want to roll that out with more banks,” says Matthew.

To date, Khula has signed up 1 500 farmers on the app and there are 56 business clients which include the likes of RocoMamas, a delivery company for McDonalds and some local Pick n Pay and Spar stores.

The Chivas Venture competition is not the only one that Khula has succeeded at. Last year the company won the MTN App of the Year competition. While Khula has enjoyed much success in entrepreneurial competitions, Matthew has some cautionary advice for other would-be entrepreneurs.

“The Chivas Venture was quite tough. We’re in an advanced stage where we have had a few successes and they are starting to snowball. My best advice is that you have to be patient. For us it’s been a three-year journey and you just have to keep persevering.”