You are Here > Home > Podcasts > Listen: Building a retirement portfolio

The last four years of poor market performance highlighted the risk of relying on capital drawdown in retirement. In this final edition of our Investment Series with Marriott Income Specialists, Maya (@mayaonmoney) and Mapalo (@womanandfinance) discuss how to start building a retirement portfolio that will provide a predictable and sustainable income.

Retirement can be a daunting prospect. Not only is it a time of personal adjustment but it is also a time to make financial decisions that will impact your lifestyle for the rest of your life. Retired investors commonly face the dilemma of either maintaining a certain lifestyle or adjusting it in order to preserve their savings. Typically the more income one draws and spends today, the less is available to create future income. When inflation is added to this quandary, it becomes important to also grow that income over time to retain one’s buying power.

What does history teach us about living annuities?

Marriott has researched the sustainable levels of income that retirees were able to draw historically, to better understand the difficulties retirees face and why in retirement you should spend the income and not the capital.

Jargon buster: Living annuities are popular retirement products used by retirees to meet their income needs. The major advantages of these products are choice, flexibility and retention of ownership. Their shortcoming, however, is that they place the responsibility of guarding against longevity risk – the risk of outliving one’s savings – in the hands of the retiree.

Marriott’s research, using returns for South African asset classes going back to 1900, tested how much retirees could safely draw from their savings without running out of capital for 30 years. We assumed each retiree invested R1million in a typical balanced fund (comprising 60% equities, 30% bonds and 10% cash) and drew an annual income that kept up with inflation.

The graph below shows the maximum initial safe withdrawal rates retirees were able to draw and not run out of capital over a 30-year period.

The table below summarises the percentage of retires who failed (failure rates) using different drawdown rates for all 88 retirees with a 30-year investment horizon. 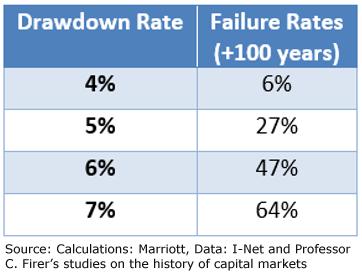 A drawdown rate of 6% is common in the marketplace but our research shows that at that rate, almost half of retirees would have failed. The concern for retired investors today is that market returns are expected to be below average for the next decade, due to demanding valuations combined with lower growth expectations. This suggests many living annuities will come under pressure in the years ahead.

Investors should be aware of how much income their portfolio is generating and try to draw no more than the income produced, thus avoiding capital erosion. Investments that produce reliable and consistent income streams assist investors to avoid capital erosion over time. If an investor can avoid capital erosion they can secure their future income. It is especially important in the early stages of retirement that capital is preserved as far as possible. If investors wish to draw more income than what their investment is producing, it should be with the knowledge that they are eroding their capital.

Marriott funds are managed with an income focus: to produce a certain amount of income as well as income and capital growth. This investment style is in contrast to many others where the investments are managed with a capital growth objective. The basis of a capital growth objective is that investment growth will offset the income withdrawals. This appears to work well when capital values are increasing because capital erosion is masked by the market rise. When markets decline however, the value of the investment will decrease sharply due to the twin effects of an eroded capital base and decreasing capital values.

Investors not only need to preserve capital but also need to ensure they protect themselves against the impact of rising living costs over time. Investments that produce a reliable income stream that grows over time, like equities, are critical for a successful retirement as the income produced from these investments tends to grow ahead of inflation. By including equities with a reliable growing income stream, investors will be able to ensure growth in income over time. The trade-off of including equities, however, is that an investor’s portfolio will produce less income initially. Investors need to find the appropriate level of exposure between the different asset classes that will give them enough income and income growth over time.

At Marriott, we suggest that investors examine their situation carefully when considering using capital to supplement their income. We strongly urge investors to preserve capital until they reach a stage in their retirement years when it may become safer to draw down on capital.

While investors may find it challenging to restrict their annuity income to the income produced in the current low-yielding environment, it is preferable to finding that one’s capital has been partially or even completely eroded.

Rather be conservative now than risk having to find another source of income, such as going back to work or having to reduce one’s standard of living at some point in the future.

The simple truth is: if you spend more than you earn, you will erode your capital and ultimately erode your income. When it comes to investing, particularly in retirement when capital preservation is paramount, this age-old wisdom rings true even today.