You are Here > Home > My Retirement > Video: Do I have to purchase an annuity at retirement?

Video: Do I have to purchase an annuity at retirement?

Chris is about to retire and wrote to us asking what he should do with his provident fund.

A provident fund (unlike a pension fund or retirement annuity) allows you to take the full lump sum at retirement; you are not forced to purchase an annuity.

Chris asked whether rather than buying a living annuity, it would make sense to cash in the provident fund at retirement and invest it himself in a unit trust portfolio, drawing down 4% of his capital as income each year. 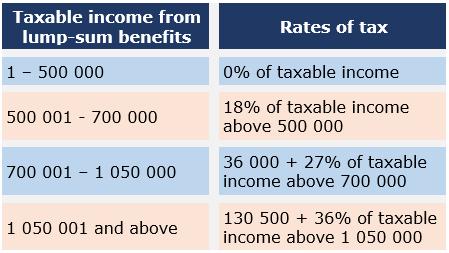 The tax consequences of this decision would be significant. If he had not made any withdrawals prior to his retirement, he would be able to draw R500 000 tax free. However, the rest is taxable as per the retirement tax tables (see graphic).

On any amount above R1 million he would pay 36% to the taxman – more than a third of his retirement benefit.

If he rather invested into a living annuity, there would be no tax payable and he could still draw down his monthly income from the full R2 million.

If he made the full withdrawal and invested in the unit trust, he would also pay capital gains tax, dividend tax and tax on any interest.

Within an annuity structure these investment taxes do not apply, however, Chris would pay income tax on the income from the annuity. It’s worth keeping in mind that from the age of 65, you can receive an income of just over R10 000 a month before you start to pay income tax.

It is important that Chris does a proper assessment and gets some good advice before making such an important decision. This could make or break his retirement.

Listen: How to decide on the right retirement village

We all go through the aging process, and one of the big decisions we have to make ‒ for ourselves or for our parents ‒ is whether (and when!) to downsize and move into a retirement village. This is not an easy decision and can be further complicated by the different...

The effects of delaying your retirement

National Treasury has made it clear that it does not support any calls to allow members to borrow money from their pension funds. This was in response to a Private Member’s Bill to amend the Pension Funds Act. This Bill was put forward by DA MP Dr Dion George as a...