You are Here > Home > Financial Sense Home > Is your retirement fund safe from plunder?

Is your retirement fund safe from plunder? 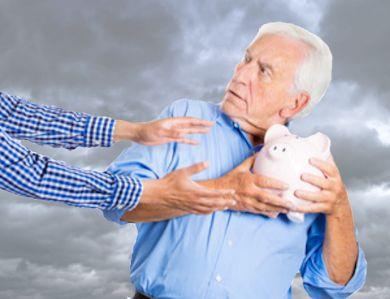 Many South Africans believe that their retirement funds are under attack. Financial planners are inundated with queries from concerned clients and some are even stopping their retirement contributions.

Is this fear well founded or an over-reaction to media headlines? As a member of a retirement fund, should you be worried?

Financial planner Gregg Sneddon says many of his clients have stopped contributing to their retirement annuities, preferring to take their after-tax money and invest offshore.

“To be honest, given the current rhetoric from government and the weak economy, I am not advising young people to take out a retirement annuity,” says Sneddon who adds that all his clients who have turned 55 this year have opted to retire from their retirement annuities, taking one-third to invest offshore and investing the rest in a living annuity with full offshore exposure.

Scaremongering in the media

Craig Gradidge, CEO of Gradidge Mahura Investments, confirmed that they had queries from concerned clients, “generally after they have read a sensational article by someone who is scaremongering.”

Janina Slawski, head of investments consulting at Alexander Forbes, says they are spending a lot of time sending out communication to try and calm down members.

“It is depressing: an article comes out in the newspaper and now people think prescribed assets is a policy. People are already worried about their jobs and now they think government is trying to steal their money. This is not the environment anyone needs right now.”

Over the last few years, government and National Treasury have been introducing various reforms that affect retirement funds. The aim is to improve retirement outcomes and preservation, but against the backdrop of corruption, a failing economy, and concerning comments from politicians, many people have seen this as an attempt to grab pension assets.

Chris Axelson, chief director: economic tax analysis at National Treasury, says the emigration draft proposal is simply part of a process to remove exchange control for individuals as announced in the Budget in February 2020.

“We are removing exchange controls in order to make it easier for South Africans to leave and return without severing their ties with the country,” says Axelson.

The announcement in February cleared the way for the removal of exchange control for individuals towards a policy of capital control. This means you could leave South Africa and keep your ties with the country, continue to have bank accounts, credit cards and if you return, you are not required to repatriate your offshore funds.

However, formal emigration was a trigger allowing individuals to cash in their retirement annuities or preservation funds. With the removal of formal financial emigration, Axelson says they require a new trigger to allow access to retirement capital. They do not want the situation where someone works abroad for a year with the intention of returning and cashes in their retirement benefits.

“It is not our intention to prevent access to retirement funds,” says Axelson who adds that they are engaging in public comment. “The figure may not be three years by the end of the consultation process, but we need to have a trigger.”

Axelson adds that it is unfortunate that this draft legislation is being viewed in light of the debate on prescribed assets.

In terms of prescribed assets and discussions around changes to Regulation 28, there is clear frustration at National Treasury around reckless statements by both politicians and some in the investment industry.

Deputy Director General at National Treasury, Ismail Momoniat, says that any changes to Regulation 28 of the Pensions Fund Act would have to follow a process set out by law. That involves public comments and would need to be gazetted. This is not something government could unilaterally or instantaneously implement.

Financial planner Gradidge confirmed that “advisers will know what is being proposed before amendments are gazetted into law and will have a chance to adjust course with clients before any changes take effect.”

Momoniat re-iterated that National Treasury’s position is that prescribed assets and lower returns cannot be imposed on members and that trustees or mandated asset managers must be allowed to decide how best to invest members’ funds.

He also commented that no-one in government outside of National Treasury has requested any information on the impact of changing Regulation 28. “There is a lot of loose talk. This is creating fear and negatively affecting savings rates,” says Momoniat who adds that the retirement reforms that have been implemented since 2011 have been aimed at improving retirement outcomes.

Currently, any discussions around amending Regulation 28, which stipulates what asset classes retirement funds may invest in, have been focused around increasing the percentage allowed for unlisted assets such as infrastructure. This is not the same as forcing retirement funds to invest in specific assets.

Slawski says she is more positive now than she has been in a long time about a way forward.

“It is exciting to read all the papers and discussion documents from labour, business and government. They are all so aligned on the issues – the need for infrastructure investment, dealing with corruption and the need for execution of these plans. There is an awareness that we need to get it right – there is so much riding on it.”

Last week Alexander Forbes hosted Enoch Godongwana, head of the ANC’s economic transformation committee, to speak at a client seminar and he reiterated that using pension funds to bail out failing state-owned enterprises is not a consideration.

Stanlib economist Kevin Lings wrote this week that the SA infrastructure plans make a compelling case. “The logic of what government is proposing regarding the development of SA’s infrastructure is compelling. Not only does SA desperately need to renew and expand its infrastructure, but infrastructure offers significant multiplier benefits within the domestic economy.”

However, Lings sums up with the critical point that there is still detail lacking around changes to Regulation 28 and that “the political authorities, in general, appear reluctant to fully discuss this proposal.”

Slawski believes that much of the fear and reaction by investors is a lack of trust due to corruption and lack of delivery.

While the plans and ideas are well supported, the trust levels are non-existent. Without strong leadership and clear, non-conflicting policy statements, it is unlikely South African investors will be convinced that their money is safe.

If South Africans don’t believe in our investment potential, then nor will the foreign investment community, whose buy-in is desperately needed to boost our infrastructure plans and grow the economy.

In a quick twitter poll, 50% of the 1 460 respondents said they would actually resign to cash in their pensions if prescribed assets were introduced. Are you concerned about the safety of your pension or do you think it is scaremongering?

Khwezi Jackson, investment consultant at 10X Investments, explains how buying a fancy new car could sabotage your retirement funding. Seeing a headline, ‘Spending R10,000 per month on a new car’, got me thinking: Why would anyone spend that much money every month to...

Video: The true cost of cashing in your pension

Do you know the true future cost of cashing in your pension? The long-term consequences are not reversible and will leave many financially destitute when it comes to retirement. This video, as part of a member education series for the Government Employees’ Pension...

Video: Make sure you receive your retirement benefits on time

As you enter retirement, one of your biggest risks is a delay between when you receive your final salary and the first payment from your pension. This video, as part of a member education series for the Government Employees’ Pension Fund (GEPF), explains what you need...

On 1 March 2021 the Taxation Laws Amendment Bill of 2020 came into effect. It contains changes that have a direct impact on the members of provident funds. These changes are part of a process to simplify the retirement fund industry and bring provident funds in line...

Many retirees have not saved enough to meet their financial needs, leaving children with the burden of supporting their retired parents. A retirement survey by Sanlam found that 51% of retirees cannot make ends meet, and one-third do not have enough money to cover...

The true cost of cashing in your pension

Have you heard of the term Sdudla? I recently came across it in relation to members of the GEPF, specifically members who are teachers and nurses. This is the practice of resigning from your post to access your pension fund. As teachers and nurses can work as...

Think before you plunder your retirement fund

Right now you may be feeling overwhelmed by debt, but the impact of drawing on your retirement fund will leave you financially destitute at a very vulnerable time in your life when you may be too old to work. You may not have many options in terms of earning an income...

Make sure you receive your retirement benefits on time

As you enter retirement, one of your biggest risks is that you could experience a delay between when you receive your final paycheque and the first payment from your pension. This is true in both the private and public sectors and managing this transition should form...

One of the questions I receive most often from retirement fund members is about who has a claim to their retirement funds if they die in service. This video, as part of a member education series for the Government Employees Pension Fund (GEPF), explains who is...

GEPF: Who receives your pension benefits?

One of the questions I receive from most retirement fund members is about who has a claim to their retirement funds if they die in service. As a member of the Government Employees Pension Fund (GEPF) one of the most important documents you need to keep up to date is...