How the coronavirus has impacted 2020’s investment outlook 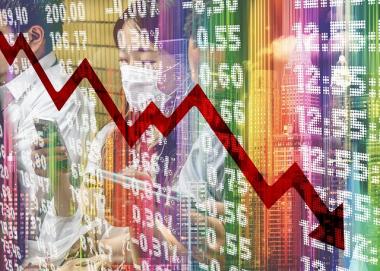 The coronavirus outbreak has rapidly approached global pandemic levels, and given the knock-on effects of the virus on economic growth, the fireworks in markets were inevitable.

From sitting at record highs, global markets sold off aggressively during the last week of February, with most equity markets dropping around 10%, erasing the gains of January and early February.

US Treasury yields plummeted to all-time lows as investors raced for safe-haven assets, while oil, energy and consumer-facing stocks were pummelled as growth markdowns filtered through the system.

Unfortunately for local markets, emerging-market stocks and currencies also didn’t escape the risk-off sword, with the rand plummeting to a low of R15.80 and the JSE All Share Index shedding 12%, before recovering.

However, the size of these moves isn’t especially extraordinary when considering the broader history of financial markets. In fact, a 12% drawdown from a record high is quite often healthy. Likewise, a 10% drop during the course of a week is usually considered measured, and even this latest example did not activate any extreme-volatility market trip switches.

The reason that so many investors may be feeling particularly anxious about this latest bout of turbulence is because we haven’t experienced normal, meaningful, cyclical retracements for the past decade, as central banks have continuously flooded markets with free cash. Even now, central banks are poised to step in and bolster the global economy, as evident by the US Federal Reserve’s emerging 50bps cut earlier this week.

The trouble with this is that the marginal efficacy of monetary stimulation has declined over time. Additionally, no amount of monetary or fiscal stimulation can solve a virological and logistical problem. Trade and travel bans have significantly disrupted supply chains, and while these challenges will eventually be resolved, there’s no doubt that global economic growth has been dealt a severe body blow, and is unlikely to achieve the growth levels anticipated at the onset of the year.

What’s next for SA investors?

Within the context of the last 12 months, the current sell-off in global equities and on the JSE is sizable. Again, however, these movements are not at all out of character for risk markets, as demonstrated by the graphs below depicting the MSCI All Country World Index and JSE ALSI’s performance over the past three years. In fact, this scare in the markets has removed a great deal of froth, and returned risk markets to much fairer valuations. 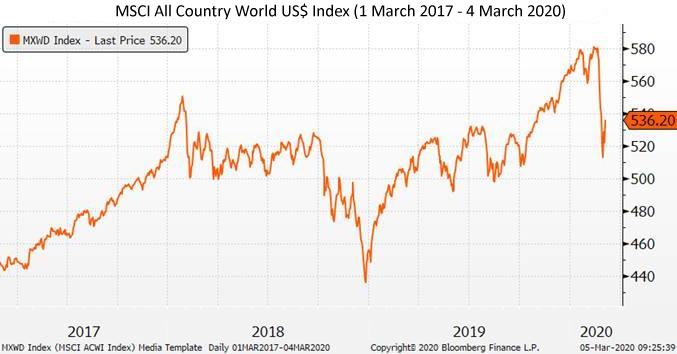 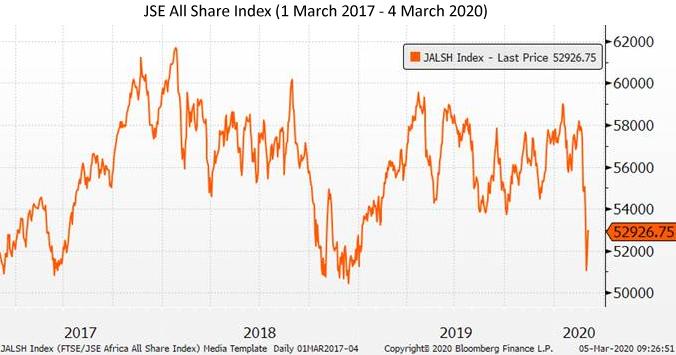 However, the deterioration of South Africa’s fiscal metrics has been a source of concern for the past few years and, as a result, at Citadel we have gradually decreased our holdings in bonds in line with the country’s credit rating.

Additionally, the twin deficit, together with SA’s politically-constrained growth potential, has kept us negative on the rand. Examining the rand’s movements from the past five years, as seen in the graph below, even at R15.80/$ the local currency does not yet appear oversold against its long-term dynamics.

Should the latest hair-raising GDP figures (which showed that South Africa entered a technical recession in the last quarter of 2019) finally cause Moody’s to react in March and downgrade South Africa’s credit rating to sub-investment grade, we expect the rand to show a flow-induced deterioration, briefly heading north of R17.00/$. This would likely be followed by some consolidation soon after, where new speculative money would be attracted by some of the highest yields in the world.

But if Moody’s again resists reacting to whatever bad news is thrown at it and keeps postponing the obvious, the rand will continue to mark time in tune with global developments until the next ratings guillotine-moment in November.

Volatility will thus remain with us in South Africa long after the world has come to terms with COVID-19.

Stick to your investment roadmap

Recent market moves are well within normal risk bounds for their respective asset classes, and the reality is that markets often react unpredictably. But, as the old saying goes, “It doesn’t matter until it does.”

With this in mind, while risk markets have returned to much fairer valuations, we will be closely monitoring whether the current disruption will merely hamper economic growth in the short term, or whether it will totally trip up the global economy into a full-blown recession.

Currently, there’s little foundation for deducing the latter, but the future is uncertain and impossible to predict. It is therefore vital that investors first seek professional advice in constructing investment strategies and selecting solutions that are built to absorb these uncertainties, and then stay the course.

Amidst increasing levels of volatility, sticking to your long-term investment roadmap and process, and avoiding the urge to make knee-jerk decisions is more important than ever. Remember: however scary this volatility may seem, it is a natural part of markets and in fact is the exact foundation of long-term investment opportunities.